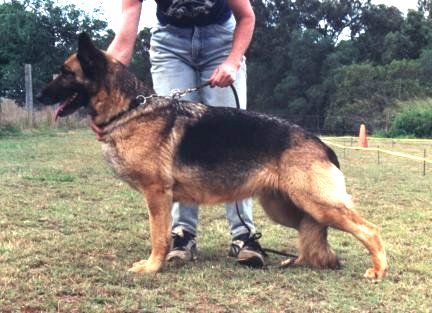 Tara, as she is affectionately known, is by Hauskirk Amparo, who is a son of the German imported dog Star vom Natoplatz.  Her mother is a daughter of the Dual Sieger, Edlenblut Orkan.  She is a fabulous producer.  In her first litter to Grand Champion Crossfire Claim To fame, she produced the beautiful Champion Masterton Aim to Fame BSCL.1.  In her second litter by Stobar Dino, she produced the Excellent graded bitch Champion Masterton Fire N Ice BSCL.1.  In her third litter by Champion Masterton Viper she produced the excellent graded bitch Champion Masterton Grey Galaxy BSCL.1  She also produced Masterton Sigourney BSCL.1 who has been consistently highly placed in her age class with Sigourney’s litter brother Stylish Century also being highly placed obtaining a 2nd in his age class at the National before being sold to Malaysia and continuing his success over there winning Intermediate Dog under Herr Bosl at his first outing in that country.  Tara’s final litter by Grand Champion Crossfire Cantona produced Masterton Barnies Rhaps.

Tara has been an obvious asset to Masterton Kennels and appreciation goes to Coralie Kirkpatrick for the opportunity to own this lovely bitch. 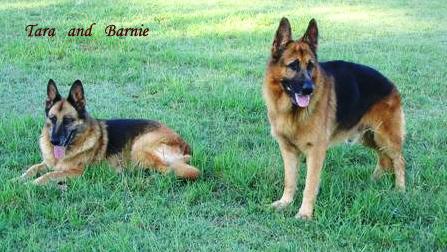 Tara filling in time with Barnie in between Cruiser's visits. 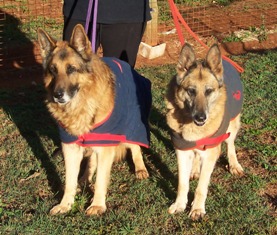 Tara with her best friend Cruiser with their pyjamas on. 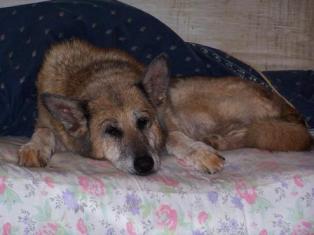 Tara @ 14 1/2 years of age who now just enjoys life as much as possible, although I am sure she is missing Cruiser who was very much her sole mate over the last few years.

She is really showing her age and also slowing down but she still gets around quite well considering her age.