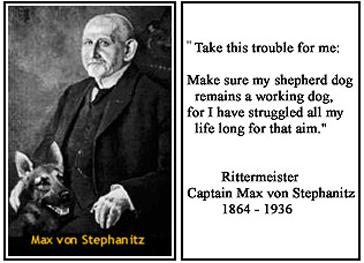 I would like to introduce you to Masterton Ambassador (Aka Toledo).  Toledo was born on 20 April, 1985 and at 8 weeks was sold into a family home.  Unfortunately, due to a marriage split up, Toledo came back home at 3 years of age.  Toledo was offered to the police at nearly 4 years of age and they accepted him.  Toledo joined the police force on 31st January, 1989.

Toledo went on and graduated as Dux of the Class while undergoing his stringent training.  Toledo then went on and became a top class police dog working for the Townsville Police squad.

Toledo did MASTERTON KENNELS proud by becoming a police dog.  What a wonderful “Ambassador” he was, he certainly did live up to his name.

Above is Popeye/Lexie's son, Chester (Masterton Ecko Point) - DOB: 25/3/02, who was donated to the Correctional Services. He passed his preliminary exam within 4 days, his dog handler co-ordinator states that Chester is the best tracker they have had in a long time.

Meet CH. Chamshep High Priority AZ, affectionately known as Ziggy, with his handler.  Ziggy is a Barnie son.  Ziggy was a show dog till his owner allowed him to go to the RAAF in Townsville where he is doing the breed proud.   Just goes to show that, once again, show lines can make the grade as working dogs.